skip to main | skip to sidebar

I caught my first steelhead in the late 90's at the Gates Mills dam on the Chagrin River.  That dam is now gone, but my first memories of steelhead fishing up and down the Chagrin are still with me even though it's hard to believe that they're well over a decade old.  That first fish changed my life.
These days it's easy to overlook my old stomping grounds - there's lots of water out there, and sometimes the stuff I've been fishing since "the beginning" can lose it's luster.  It's also a busy time of year; with Thanksgiving comes lots of angling pressure, and the public water of the Chagrin certainly isn't a secret.
I had a coveted and rare day off over the weekend, and with almost identical water conditions on Conneaut and the Chagrin I opted for the short drive.  Despite my goal of getting an early start, I slept through my alarm and was stream bound at a very-late-for-a-weekend 8:45.  At 9 I pulled into a somewhat popular access point and was shocked to find that the lot was empty.  After a quick hike upstream to a good run, I was fishing.  It wasn't long until a few fish were hooked - despite the late start the morning was looking good.  After meeting up with a few friends and killing a couple hours up there we'd fished it out and decided to head somewhere else.  Another quick jaunt up the road had us on another piece of water, and after finding the water close to the access filled up, we decided to roll the dice on a couple runs that were a little farther away.
At the first spot, on the first cast, a drift right along a good looking ledge and current seam was just good enough to fool this one. 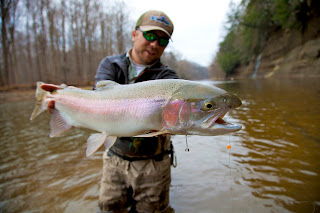 The fishing was good for everyone, and before long we tied on a few others and had lost a few more. 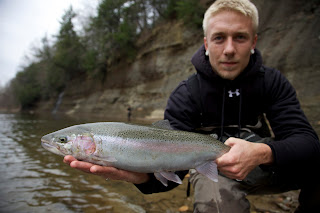 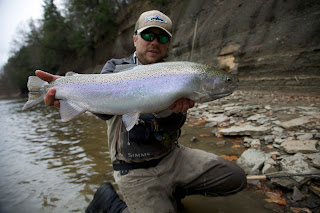 The boys were hoping to get back to the other side of the big pond by the end of the day - short on time, we decided to hit one more run and then turn around and head back understand. 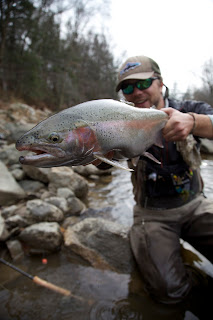 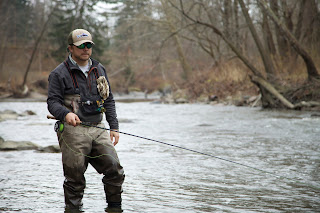 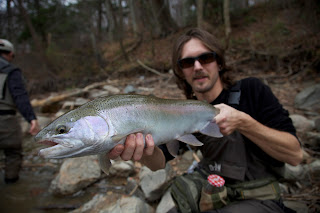 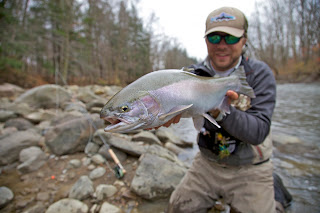 And the photographer just so happened to be shooting some video at the perfect time to catch a hookup on a super secret swingin' fly fished on the microspey.  Please forgive the music (he's not from around here) and my flubbing the landing.
It's only fitting that days like these go by too quickly, and it seems to me that this fall a good, satisfying, desperately needed day of fishing has been hard to come by.  Personally, it's been a challenging fall and the next few weeks hold the potential to be even harder.  I guess I’ll just keep my fingers crossed that the fishing stays as good as it’s been to hold me through.
Times like these call for only one thing - some time well spent on a familiar piece of water with some sentimental value.  Some would argue that knowing every nook, cranny, and mood of a river takes the fun out of fishing. I’d argue that on a day like this sometimes it’s just easier to zone out, forget the rest of life, and just fish on autopilot.  I’m a big believer of the therapeutic aspect of fly fishing, and although I’ve never caught a magical steelhead that made everything better, on days like these every fish I’ve hooked has had me fooled for at least a little while.

Some of our Favorites